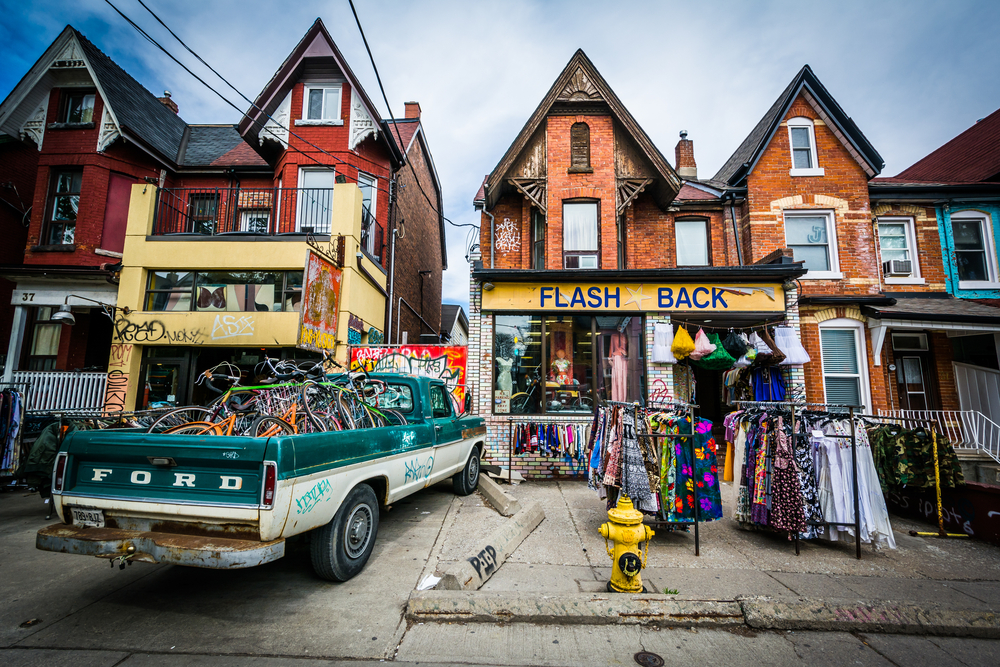 Just to the west of downtown Toronto, this eclectic neighbourhood is one of the favourites for tourists and local Torontonians alike. Kensington Market is the treasure trove of Toronto and one of the most vibrant and culturally diverse areas in the city. Renowned for its maze of narrow streets and alleyways, colourful Victorian housing, open outdoor markets, quaint boutiques and cafés, and pedestrian-friendly streets – Kensington Market has something for everyone to enjoy.

Here’s a closer look at the quaint and colourful neighbourhood of Kensington Market.

Kensington Market is located right in the downtown core of Toronto. It’s bound by College Street to the north, Spadina Avenue to the east, Dundas Street. West to the south and Bathurst Street to the west. The heart of this neighbourhood, however, can be found along the streets of Augusta Avenue, Nassau Street, Baldwin Street and Kensington Street.

Walking through Kensington Market can often feel as though you’ve stepped into a quaint little bubble, even though Queen and King Street West are only a short walk or streetcar ride away. You can even head just a few blocks south on the streetcar to access the waterfront. It’s a great central location to feel the exciting buzz of the big city.

Since this area is populated with many beautiful, old Victorian homes, it’s a popular neighbourhood for both young and older generations looking to rent since older homes often offer a much larger square footage. The charm and character of Kensington is what makes it such a popular spot for such a diverse range of people to settle into. And with many newer, modern developments located in close proximity, it offers the best of both worlds for residents looking to live here.

Kensington Market is located steps away from College Street and Spadina Avenue, where you can hop on a streetcar and access the subway line in minutes. Alternatively, if you head south along Spadina, you’ll arrive at Queen Street West and King Street West – two of the most popular streets in the city.

Whatever you’re in the mood for, you’re bound to find something to satisfy your cravings throughout this neighbourhood. Whether it’s a craving from culinary delights, a cozy bar or café, vintage boutiques, or fresh markets to pick up some local produce, there’s never a shortage of amenities and offerings throughout the bustling streets of Kensington.

If you haven’t experienced the unique charm and character of Kensington Market, you’re missing out on one of the true gems of Toronto! It’s one of the best neighbourhoods in the city, and a perfect spot to call home if you’re in search of a distinct and colourful community to join.